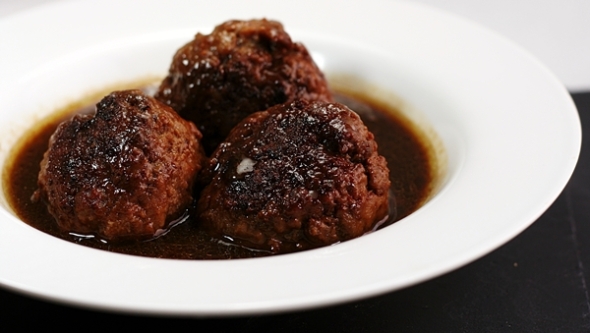 This week’s post is a follow-up to the long ramble I wrote a couple of weeks ago about Speedy Suppers.

This recipe comes with a caveat – before I have the half the Dutch nation up in arms about lack of authenticity, this is very much a British version of Dutch meatballs – made with the ingredients I can find here in my small Midlands town.

Even though they bear little resemblance to my mother-in-law’s dish, they still get the thumbs up from my husband and are a firm family favourite weeknight meal.

The recipe is for a generous serving for 4 people, but I rarely make it in this quantity, simply because it is easier to buy the meat in 500g portions and double the recipe for a make-ahead meal for the freezer.

Back in the 16th and 17th centuries The Dutch East India Company had interests in much of Asia and the influence can still be seen in Dutch food today. When experimenting with this recipe, it wasn’t until I hit upon the addition of the ketjap manis that the dish really seemed to come together, flavour-wise.

Ketjap manis is a thick, rich, slightly sweetened soy sauce. I found some in the Asian food shop here in town. Wikipedia says it can be substituted with vegetable stock and molasses, but I’d recommend Thai sweet chilli sauce instead. It won’t taste quite the same, but you’ll avoid the undesirable bitterness from the molasses.

This recipe is simplicity itself – mix everything together in a bowl and make into balls. Now Dutch meatballs are traditionally larger than we might expect in the UK, so I use one of my measuring cups to measure out the mix, usually the 1/3 or 1/2 measure. You can make smaller if you prefer – they won’t take so long to cook.

It might look like a big chunk of butter for frying, but it’s not too bad divided amongst four – and it really gives the finished dish a boost – a little luxury for this cheap but very cheerful meal. For anyone unfamiliar with Bovril, it is a concentrated (and very salty) beef extract used for stocks and sauces (which is also why this recipe deliberately contains no salt).

The meatballs freeze very well – be sure to freeze them with a little of the gravy in each portion.

Serve with mashed potato to mop up all the delicious gravy and some green vegetables.

5 Comments on “Dutch Meatballs with Gravy”