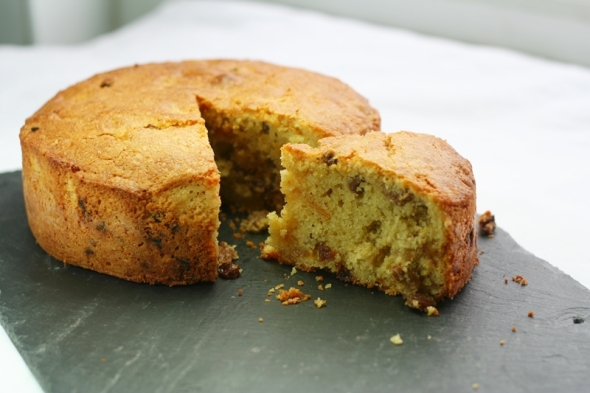 This recipe is fabulous (she says modestly) – and this recommendation is coming from an until-recently Dundee-Cake-Disliker (DCD for short). The crust is crisp but delicately thin, the insides delicately moist and buttery, rich with the sweetness of sultanas and the tang of candied orange peel.

The modern Dundee Cake has an iconic appearance, in that the carefully laid-out pattern of whole, blanched almonds immediately distinguishes it from other fruit cakes. For many years I’ve been a DCD, based on the Dundee Cakes I’d been served as a child: dry, crumbly, tasteless, overly-fruited  masses with burnt nuts on the top and, horror of horrors, glacé cherries *shudders* studding their depths.

After a bit of digging around in the cake history books, it turns out that the Dundee Cake known today is quite a few steps removed from the original. So I had high hopes that with a little experimentation I could, as with other recipes I’ve managed to rehabilitate from childhood dislikes, bring Dundee Cake back to its former glory and once again make it a teatime favourite.

Dundee Cake was first made by the Dundee-based Keiller company, as an off-season sideline to their marmalade business, as a way of using up excess peel generated by the marmalade manufacturing process. By gentleman’s agreement, no other bakers in the city made the cake. Keiller’s were also responsible for popularising their creation under the name Dundee Cake, described by Alan Davidson in the Oxford Companion to Food as light, buttery delicacy stuffed with sultanas, almonds and candied orange peel.

Quite when the cake was first made is a bit of a mystery, but it is mentioned in stories and novels of the mid-nineteenth century. An 1853 edition of The Lancet carries an advertisement for a Regent Street caterer, which includes Dundee Cake in its list of available cakes. This recipe is based on Madam Marie de Joncourt’s 1882 recipe, but tweaked to conform to the description of the original delicate and rich cake: more butter, almonds, sultanas and peel, no currants, no almonds on top. I’ve left off the distinguishing almonds, because they’re not mentioned in the original recipe, but you can make your own decision on that.