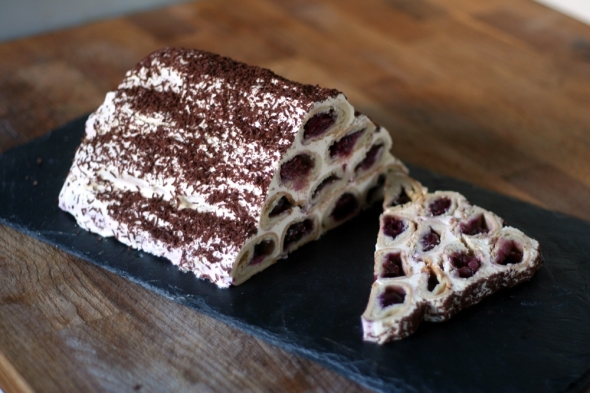 Here’s a wonderfully different dessert that has the advantage of being almost infinitely customisable. It’s simple, easy to assemble, can be made ahead, and any mistakes can be conveniently covered up with the decoration.

There are many variations out there on recipe sites and foodie blogs, and consequently, this dessert goes by many names. Other variations include Log Cabin cake and Monastic Hut Cake – really not sure Google Translate has really captured the essence too well on that last one – maybe it’s more ‘Hermit in the woods’ than monastery? Anyhoo…..These names all come from regions within the former USSR, and as with a lot of dishes – as the recipes cross borders, they become known by different names and acquire tweaks and nuances specific to a single location.

The name for this dessert that I found most charming was Guguta’s Hat. This originates in a children’s tale written by beloved Moldovan author Spiridon Vangeli, partly due to the description within the story, and partly due to the delightful illustrations that accompany the tale.


The hat he wears is a traditional shepherd’s Astrakhan cap of lambswool, and it is a magic hat, because it can change size, growing big enough to keep friends warm when walking home from school, and even large enough to cover the whole village.

When sliced, this cake does indeed resemble the curls and triangular shape of Guguta’s magic hat.

Essentially, it is of the same family of recipes as the Russian Honey Cake, in that crisp pastry is left to soften overnight under a blanket of slightly sweetened creme fraiche (sour cream in the original recipe). The difference is that the pastry here is filled, and this is how this dessert can be both tweaked to your individual taste and infinitely varied.

Traditionally, the filling is of cherries – the availability of canned ones making it an ideal winter dessert, but it also works with fresh (only attempt if you have a cherry pitter gadget). Alternate fillings are only limited by your imagination – dried fruits macerated in alcohol immediately spring to mind – prunes and apricots would be a nice mix. For added crunch, toss in some nuts, or even ladle in some mincemeat (which I think would be especially delish).

This is not a sweet dish  – unless you choose to make it so: Neither the creme fraiche nor the pastry (adding any more sugar will make it lose its shape during baking) have much sugar in at all, and although I tossed the fruit in sugar to help draw out the juice, most of it was left in the bowl. If you have a really sweet tooth, I suggest going to town on sweetening the filling.

The traditional cake has five layers in total, but this makes each slice so huge, they barely fit on a dinner plate let alone a side plate, so I’ve made one less layer and made the tubes of filled pastry a little longer to compensate.

Variations: I’ve read variations where the ‘filling’ is actually kneaded into the dough, instead of being wrapped in it. If you’re short of time, a speedy version could be rustled up using pancakes instead of the biscuit, meaning that the finished cake didn’t need to ‘soak’ overnight. However, in this instance, the creme fraiche should be drained in a sieve for several hours before mixing in the sugar, as this alone will make it more runny. If you’re feeling adventurous, I’ve even seen pictures savoury versions using pancakes and crab/fish fillings.