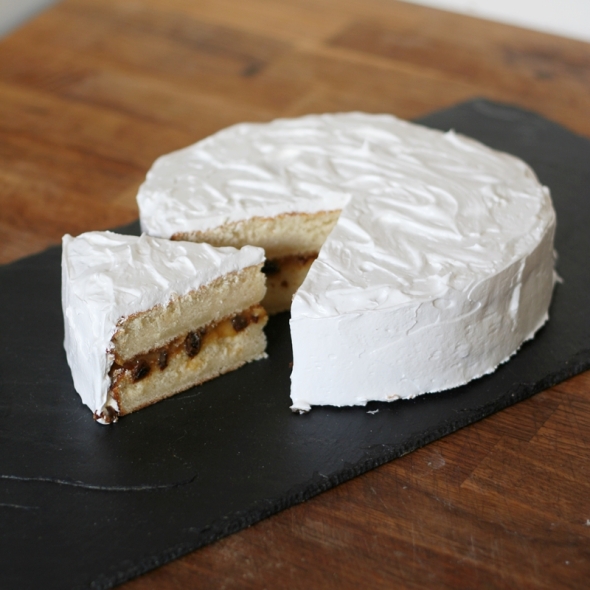 This is my End-Of-Term post for 2014, before taking a short break over the summer to do Stuff™, and so I have chosen a cake that has been on my ToDo list for many a moon.

This is Ms Emma Rylander Lane’s Prize Cake, with which she was declared champion at the Georgia State Fair, Columbus in 1898. It is also the cake immortalised in Harper Lee’s To Kill A Mockingbird. When the novel’s narrator, Scout Finch, described the celebrations for the arrival of her aunt Alexandra, she declared:

Miss Maudie Atkinson baked a Lane cake so loaded with shinny[1] it made me tight.

Miss Maudie later decides that a Lane Cake is in order when a neighbour is hurt on the night Miss Maudie’s house catches fire.

“Mr. Avery will be in bed for a week – he’s right stove up. He’s too old to do things like that and I told him so. Soon as I can get my hands clean and when Stephanie Crawford’s not looking, I’ll make him a Lane cake. That Stephanie’s been after my recipe for thirty years, and if she thinks I’ll give it to her just because I’m staying with her she’s got another think coming.”

Over the years, the Lane Cake has suffered several adulterations and been added to and embellished like a baking Pass The Message game, and what is now purported to be a Lane Cake is frequently a far cry from the prize-winning original.

The original cake is deceptively simple: a sponge cake made with egg-whites and a dazzlingly white meringue frosting. The star, however, is the filling: a rich, sweetened egg-curd studded with raisins and shimmering with alcohol, in this case brandy although whiskey is another option.

I love the fact that, not only was the Lane Cake a special occasion cake, it was also a nineteenth century humble-brag. Refined Southern ladies would not be so coarse as to boast about their baking skills *pauses to sink gracefully onto a nearby chaise-longue and flutters fan coyly* but it would be patently obvious to anyone with any baking ability just how impressive a Lane Cake was in terms of demonstrating the baker’s skill. Not only were there few gadgets for whisking eggs and creaming butter/sugar to ensure an airy sponge, the ovens were unpredictable in terms of both strength and duration of heat. Making the filling without curdling the yolks or the frosting without burning the sugar was impressive indeed. I wouldn’t be surprised if the cook treated herself to a decent glug of shinny herself – with all that stress she’d have earned it!

I really like the contrast between the simplicity of the cake and frosting and the gutsy richness of the filling. I think the original recipe needs nothing adding to it – it’s delicious just as it is – although additions over the years have included coconut, cherries, pecans etc. Gilding the lily, in my opinion. To my mind it’s akin to someone ‘improving’ Chanel’s Little Black Dress until it resembles Carmen Miranda, complete with fruit hat.

Nevertheless, there’s a couple of things that will need your consideration/decision-making when making this cake.

This is the original Lane Cake recipe but for one fact: it’s half the size. The original recipe called for the mixture to be shared between four cake pans, which I don’t have. Now I know I could have used 2 tins and then split each cake horizontally, but I also don’t have a large enough audience to consume said cake once assembled. Making it just a two-layer cake is still an impressive-but-manageable size, and can also be easily scaled up should the occasion arise.

Have fun in the sun until next time – and don’t get too loaded with shinny! 😉 M-A

To assemble the cake.

[2] Sifting the flour adds air, which in turn add lightness to the sponge. The quantity stated in the recipe is as a result of converting from US Cups. I might have sifted too much or too little air into the flour, so it’s more of a guideline than a hard and fast quantity. Keep some sifted flour on hand to add in case the cake mixture proves too loose.