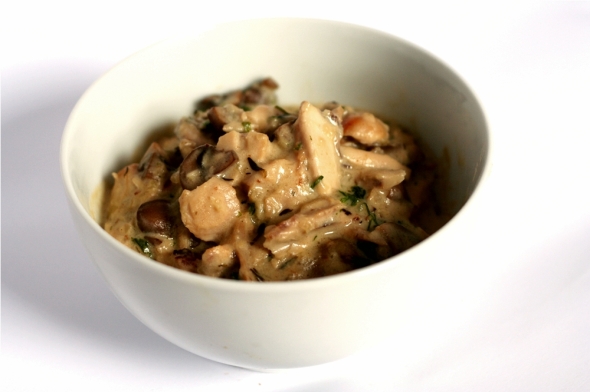 I’m going full-on retro this week, with the tweak of a classic from my days as a bistro waitress, back in nineteen tumpty-tum *waves hand vaguely*

Created in the early years of the 20th century in the United States and named after Italian opera star Luisa Tetrazzini, it is usually found on late-December tables made with leftover turkey and a can of condensed soup. *shudder*

This, however, is an altogether more delicate affair with fresh herbs and mushrooms and a splash of wine.

I love this dish for lots of reasons – it’s easy, its versatile, you can cook it from scratch, but it can also be created from cold chicken and cooked pasta, which means it can be assembled in a relatively short amount of time. The sauce – if  I say so myself – is AMAZING: I could quite happily eat it by itself. If you’re in a hurry, then it can be served straight from the pan as a pasta sauce – but if you have the time to make it ahead, it can also sit in the fridge in a casserole and then heat through in about 30 minutes when needed, with no need for any further attention.

I don’t usually fuss too much with specific types of ingredients, but for this recipe I strongly recommend using the chestnut mushrooms if possible – other mushrooms tend to turn the sauce a rather unappetising grey. Fresh thyme is also preferable, but 1.5 tsp of dried thyme can be used instead.

The amounts of both chicken and mushrooms can be varied according to taste or availability. Since the cooked mushrooms have a meaty texture, they mix well with the chicken, and can easily make a small amount of chicken stretch to a family meal. The pasta can be any shape, but shells (conchiglie) and twists (fusilli) hold sauce the best. Alternatively, egg noodles are quicker.

Variations
Peas go very well with this recipe, either as a side dish or stirred into the sauce itself.
Turkey – This is equally amazing when made with turkey – a welcome standby to have when faced with mountains of Christmas leftovers.
Vegetarian – just omit the chicken and increase the amount of chestnut mushrooms to 1kg. Use vegetable bouillon powder when making the sauce.
Pasta – consider using long, flat pasta such as linguini.