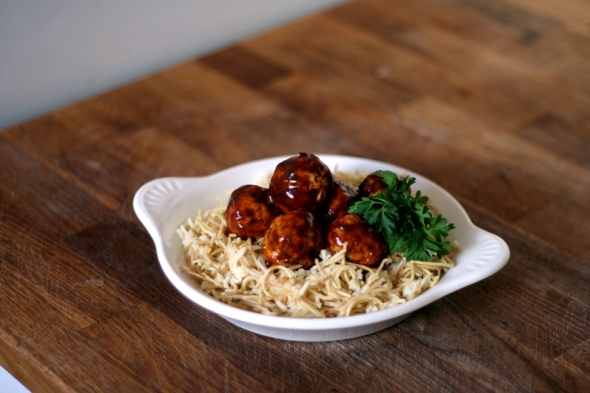 I love a cooking show (duh!) and I really liked The Taste, with Nigella, Bourdain and  Lefebvre, although it seems the powers that be on both sides of the Atlantic don’t share my enthusiasm, as neither the US program not the UK version is currently showing any sign of life. Ho hum.

For anyone unfamiliar with the premise, food was tasted blind, without prior knowledge of who had made it, beginning at audition level and continuing throughout the series. In addition, you only got to serve the judges a single spoon of your dish, so crafting this mouthful from an entire dish was a skill in itself.

Had I ever auditioned, THIS, gentle readers, would have been my single-spoon audition offering.

Although this post is only for the meatballs, you can make the above meal by using previous blog posts to rustle up some Noodles and Rice and Barbecue Sauce.

This has been a very popular meal in our house for a number of years and I’m especially pleased with it as it tastes amazing whilst incorporating one of the dullest ingredients that could ever grace your shopping trolley – turkey mince. Which is CHEAP and LEAN and HEALTHY and so very, VERY dull by itself. Seriously, I nearly nodded off just typing that. However! Zing it up with some bacon, parsley and spring onions and it is a delicious surprise to all who’ve tried it. Literally. I mean, we’re talking almost cartoon-level double-takes after the first bite.

You don’t HAVE to serve it with the barbecue sauce – any spicy sauce will do – but it does marry very well with the other ingredients. Often I like to enjoy them without any sauce at all, just enjoying the mix of flavours. Similarly, don’t feel obliged to go with the noodles and rice – the meatballs make an awesome sandwich in a crusty baguette – ideal for a packed lunch because these meatballs taste almost as delicious cold as hot, as do the noodles and rice. If only there were ever enough left for sammiches…….