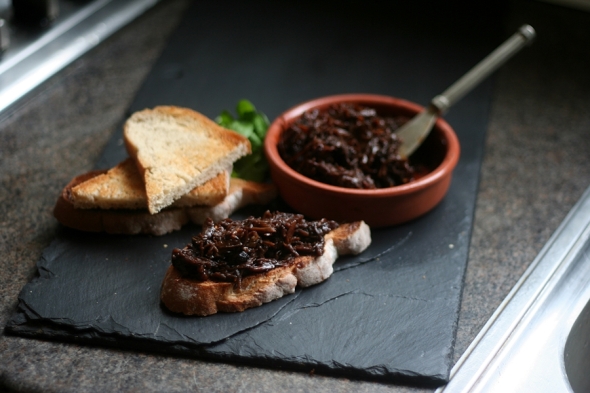 Here’s a companion recipe to the Bacon Jam of a couple of weeks ago – perfect for a twin gift pack for your local friendly carnivore if you’re going for an Edible Gifts Christmas. I highly recommend it if you’re unsure – people don’t want stuff, they want delicious stuff to eat! It’s a thoughtful expression of affection because it involves that most precious commodity – your time – spent selecting and then making the recipes.

This time, the meat in question is oxtail and if you’ve for a slow cooker, then there’s going to be very little for you to do for most of this recipe. Price-wise, it’s not as budget friendly as the bacon, but it’s pretty close at (currently) around £6.00/kg. In addition to melt-in-the-mouth, tender meat, you get fantastic stock and flavourful fat (for use in pies and for adding flavour to casseroles), so all in all quite the bargain.

This marmalade is extremely dark and rich-tasting, but comes at the price of having to spend some time separating the cooked meat from the bones. This is a doddle once it has been slow-cooked overnight, albeit a rather sticky job. The meat is then simmered with a little of the cooking liquid and, as with the bacon jam, some additional flavourings to round out the taste.

Again, like with the bacon jam, I’ve spent considerable time consulting the other recipes ‘out there’ – and then opted to ignore a lot of what they profess and go my own way. The original recipe suggested adding alarming quantities of port, wine, butter, sugar, onions, carrots – and serving with roasted marrow bones. This is a much simpler version and has no truck with any non-meat distractions. Personally, I think it’s rich and complex enough.

This is not a speedy recipe, but it is easy and straightforward. You can spread the preparation out over several days if liked.

Keep in the fridge and warm though gently before enjoying on crisp wholemeal toast.

To cook the oxtail

To make the marmalade

You can use all the meat and all the stock if you like. These amounts are given more as a guide as to the ratio of additional flavourings.

If you have any meat and stock left over, you can combined them and freeze for use later either as a ragu for pasta, or a hearty pie filling.