I love a good cheesecake. I don’t, however, love ALL cheesecakes.

*pauses dramatically for the compulsory gasps of horror*

No, to my mind, if you’re going to elaborate on the indulgent simplicity of flavours such as vanilla or maple syrup, cheesecake needs something sharp to act as a contrast to the richness of the filling.

So I say “Away, foul fiend!” to a whole slew of flavours that, to my mind, shouldn’t be paired with cheesecake, mostly in the chocolate, toffee, Banoffi, caramel, praline range, and “Come to Mama!” to all the tart and sharp fruity flavours. Lemon cheesecake was a long-term favourite, but anything that has a sharpness to it is delicious.

There are two main styles of cheesecake: baked and no-bake. I’ve got several recipes on the blog for various baked cheesecakes but haven’t done a no-bake cheesecake, so here we are.

After a little experimentation, I’ve come up with something that will work for any fruit puree you might have to hand. I’ve used gooseberries, but you could also use this recipe for poached rhubarb, plums, damsons as well as raw fruit purees such as strawberries, raspberries, cherries etc.

Another way you can customise this recipe is by swapping in ingredients that will give a texture that you like. A baked cheesecake is usually rich and dense, whereas no-bake cheesecakes tend to have a lighter texture as they rely on gelatine to hold their shape once set.

The filling for the cheesecake in the photo has been made with equal parts of mascarpone, creme fraiche and double cream mixed with the fruit puree, which makes for a creamy but still light texture. If you prefer a denser consistency, you can substitute cream cheese for the mascarpone or creme fraiche or even both. Quark is a fat-free dairy product, but might take the texture towards a mousse rather than a cheesecake. Nothing wrong with that at all, of course, as long as it’s what you were wanting.

A word or two about gelatine. At the risk of stating the obvious, gelatine renders your dessert off-limits to vegetarians. Whilst this might be your dastardly plan, you can still make this dessert so all can enjoy. Vegetarian gelatine is generally available, but not in the sheet form used in this recipe. You should follow the vege-gel guidelines for blooming and using it in your dessert.

The other thing to bear in mind, whichever form of gelatine you use, is that it’s not very fond of acidity. Using the quantity stated on the pack to set a very sharp, acidic liquid is not going to be as firm as if the liquid is neutral in flavour. You might like the texture, but as a general rule, I would advise using extra gelatine to ensure your dish sets as expected.

For example, the recipe below generated 300ml of gooseberry puree. Normally, 2 sheets of gelatine will set 300ml just fine. I used 4 sheets of gelatine a) because of the sharpness and b) because of the volume of filling into which it was to be mixed. The mixture of creams and cheese is quite stiff when whisked together, but adding the puree slackens the mixture off considerably. Having the extra gelatine in the puree meant that all of the filling set, once it had been folded through.

In contrast, for the gel on the top of the cheesecake, I only used a little extra gelatine, which resulted in a much softer final set.

For leaf gelatine, 1 leaf will set 150ml of liquid. Powdered gelatine and Vege-gel are sold in packets that usually set 1 pint (570ml) of liquid. Weigh the granules and divide by four for an equivalent guideline amount.

Last topic before we get on with the recipe – the biscuit base. You can make this from a range of commercially produced biscuits or make your own. Traditionally the biscuit has been Digestives, but other (British) types include HobNobs, Ginger Nuts, Butter Crinkles, Rich Tea – anything crisp. I’ve even used Doriano crackers (similar to Saltines), which give a deliciously unexpected saltiness as well as crunch.

For this recipe I have chosen to use a crumb of Spekulaas, the traditional Dutch Christmas biscuits. They are definitely crunchy and add a nicely spiced note which complements the gooseberries. Any favourite crisp biscuit can be used, merely bake the dough in its breadcrumb-like state and blitz in a food processor when cooled.

You can use either green or dessert gooseberries for this recipe. Green gooseberries (see photo at the bottom of this post) ripen earliest, and pair very well with elderflowers. You can substitute half the poaching water with elderflower cordial if liked. Dessert gooseberries are sweeter and with a rosy blush which makes for the beautifully coloured topping in the top photo. These quantities makes a large cheesecake, so if that doesn’t suit your needs, consider halving the recipe. 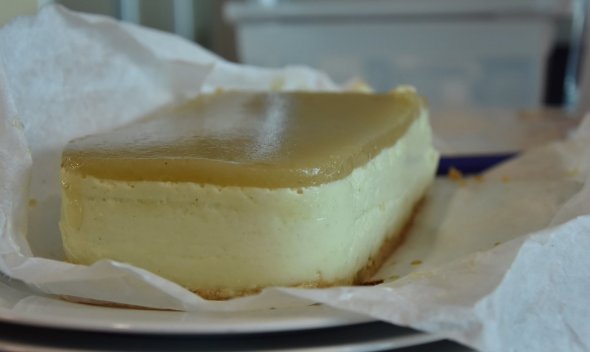 10 Comments on “No Bake Gooseberry Cheesecake”