OK, so maybe that’s stretching things a bit, but what it WILL do is provide you with a selection of (up to) four separate desserts to enjoy.

This can be scaled up or scaled down according to the quantity of rhubarb you have.

Now you could stop here and you’d have a lot of delicious poached rhubarb to enjoy. I like to eat my rhubarb chilled, with either a little cream or, when in the mood for food from my childhood, (unsweetened) evaporated milk – it’s heavenly.

If you fancy taking things to the next level, however, we can proceed to making rhubarb jelly. If you would like to set your jelly into domes, you will need a hemisphere silicon mould sheet.

There are two ways to make rhubarb jelly from your syrup, the simple way and the more challenging, crystal-clear way.

Top Tip: Later in the year, when the rhubarb stalks are giant and green and tough as old boots, you can still make rhubarb jelly – just chop them up small and simmer them in water until you think all the flavour has been extracted. Strain well, sweeten to taste, then proceed as above. The jelly will have an almost pearlescent sheen to it (see below[2]). 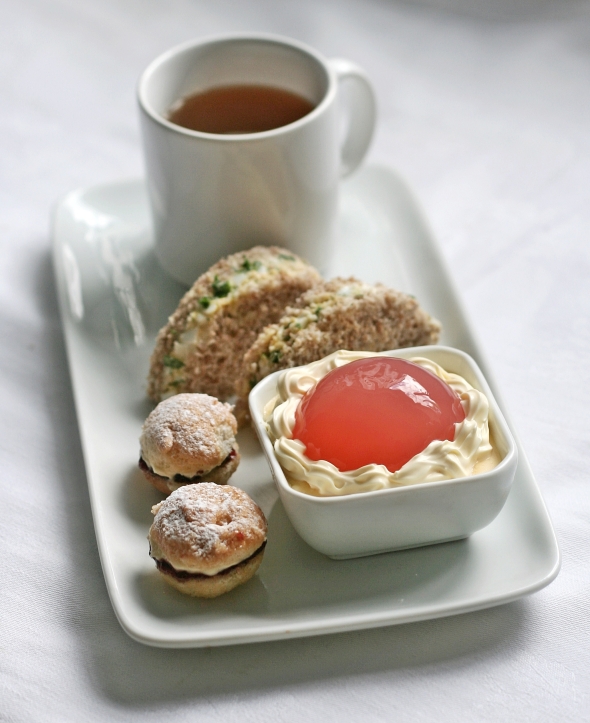 This is a little more involved, but not difficult by any stretch of the imagination. In this method, we clarify the rhubarb syrup using egg-whites. A certain amount of syrup will be lost in the process, so start with a little more than you need.

I made individual cheesecakes for the photo at the top, but you may decide, after making your crystal-clear jellies that this is all too much Faff™ (understandable). If this is the case, just make a large cheesecake in one tin/mould, and use your rhubarb domes around the edge as portion ‘markers’. I deliberately used ready-made custard for that real custardy taste – but if you want to make your own, or use a creme patissière, have at it.

[2] This photo is from a book project I was working on for afternoon tea using historic recipes. Unfortunately, I couldn’t find anyone to be enthusiastic about it, so it is now languishing in a folder on my laptop. If you’d like to publish it, drop me a line! 😉