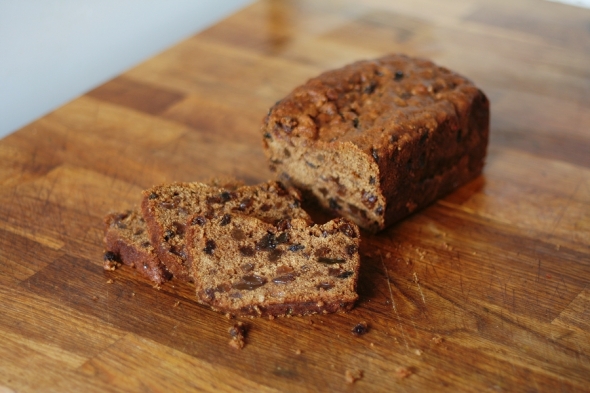 The first cookery book I ever bought was the 1982 paperback edition of Poor Cook by Susan Campbell and Caroline Conran.

It was on the recommendation of a friend who said she liked it because the recipes usually didn’t require a trip out to the shops with a list as long as your arm of ingredients. Since then, we’ve drifted away from that kind of cooking, so that now a trip out to buy ingredients is the norm, and cooking becomes a performance.

Whipping up a batch of scones or making a cut-and-come-again cake shouldn’t warrant any drama so recipes which you can make from the contents of your cupboards are always going to be a comfort. The Apple Cake recipe in Great British Bakes is another such recipe – also egg-free, and proportional, so you can scale it to however many apples you have to hand.

Which brings me to this week’s recipe.

Aside from being moist, tender and delicious, this cake is great to have in your repertoire because it is made from store-cupboard staples, doesn’t require eggs and can easily be made both gluten and dairy free. It’s simple and straightforward, basically a 2-bowl recipe: mix wet, mix dry, mix together, put in tin, bake.

If it has a down side, it’s the slow cooking time (1 hour), but if you’re anything like me, a 1 hour wait is a small price to pay for being able to avoid a trip out to the shops before you can treat yourself.

I’ve made this recipe with a number of different flours from stone-ground wholemeal bread, through barley to gluten-free. The gluten-free version was extremely tender, to the point of crumbling when sliced. Nice, but a bit tricky to eat politely as a slice – crumbled into a bowl with cream or ice-cream, glorious! The wholemeal bread flour was firmer, but still much more tender and moist that your average fruit cake. Switch out the butter for coconut butter to make it dairy-free.

You can vary the liquid and spices to suit your own personal tastes. The original recipe used all water and a mixture of cinnamon and cloves. I’ve substituted half of the liquid for rum and used mixed spice. Go with what you have/like.

The aroma of this cake is fantastic, especially when warm from the oven.