← Choux Pastry
A Taste Of The Netherlands Giveaway → 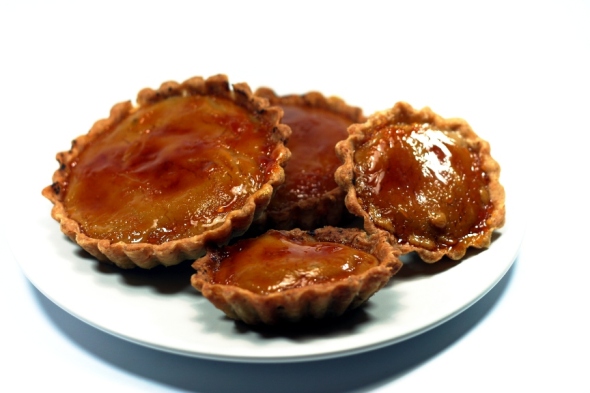 Very belatedly is one of my Bake Off recipes that didn’t get much screen time, compared to the Apple Rose Tarts – but it might actually edge ahead of them in the taste stakes. This post is for my beautiful and talented sister Georgina, who’s been waiting patiently for this recipe ever since Tart Week. Go follow her on Twitter ( @Georns ) – she says/tweets cool stuff!

When the Bake Off began airing, I was interviewed by the local BBC radio station, and was asked what my favourite food from childhood was. My answer was the Butterscotch Tart we had for school dinners. (I should point out at this stage that my mother was Kitchen Supervisor at the central kitchens that supplied the meals for all the schools in the local area – a fact which earned me by turns admiration and resentment at school, depending on the menu of the day – and occasionally both at once when the menu was particularly divisive.) I also had a great fondness for Butterscotch Angel Delight, although its appearance on the dinner-table was rare,  because it was everything our regular puddings at home weren’t. Packed to the gunnels with flavourings, colourings and preservatives and – most deliciously decadent – it came out of a packet! Such a NORTY pudding! *sighs wistfully*

ANYHOO – These tarts are very simple – a pastry shell filled with a flavoured custard. For the Bake Off, however, I jazzed it up a little by adding pecans to the pastry, and just a drop of scotch to the filling, which really turns this nursery pudding into something altogether more grown up. As a final flourish, I decided to brulee the tops to add some crackly crunch. Now bruléeing caster sugar with a blowtorch can be tricky – it only takes a second to go from caramelised to burnt, so I was really pleased to discover ‘Brulée Sugar’. It sounds really fancy, but it’s easy enough to make yourself. and involves the alchemy of sugarwork!

There’s a theory out there *waves hand vaguely* that one of the characteristics of sugar is that it yearns to return to its previous form – which goes a long way to explaining why it is important to wash the sugar crystals off the side of your pan with a wet pastry brush when boiling sugar. It doesn’t take much for the whole lot to crystallise and then there’s no recovering – you just have to start again.

SO – going along with this theory, if the end result (brulée) is essentially melted sugar, then isn’t starting with sugar in crystals (granulated or caster) just making life difficult for yourself? If you started with a sugar that used to be melted, it would be so much easier to return it to that state, because that is the state it would ‘want’ to be in! It might sound bonkers (sentient sugar!?) but I was impressed with the speed at which it dissolved into golden caramel under the flame of the blowtorch. So here’s how we do it!

This is a great make-ahead dessert, because you can just assemble it all at the last minute: pour the custard into the cooked pastry shells, sprinkle with brulée sugar, apply flame and serve at once. However, if there’s going to be any length of time between making and serving, consider also chilling the custard-filled tarts in the fridge, uncovered. A slight skin will form on the custard, and this will form a barrier between the custard and the Brulée Sugar. I didn’t do this when making these tarts to photograph, and as you can see from the picture (if you look closely), I faffed about so much taking the pictures, the moisture from the custard is causing the sugar of the brulée to dissolve, and the custard is starting to show tiny cracks.

To serve, fold in cream if required.

[1] I use this mixture of sugars because I like the dark butterscotch taste it produces – which might not be to everyone’s taste. Think of it as the butterscotch equivalent to 70% cocoa chocolate and milk chocolate. If you think this might be too intense a flavour, use 200g (total) of Demerera sugar instead.