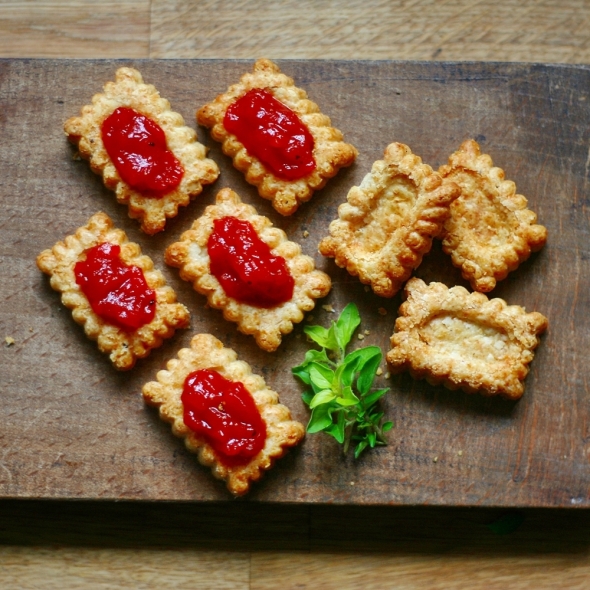 A Bake Off recipe that never was, this week. Back in 2011, I was busy writing recipes for use on The Great British Bake Off, as all recipes had to be written and submitted before even one second of filming was completed.

Week 4 was Biscuit Week and right down to the wire I couldn’t decide whether to go with sweet Melting Moments or savoury Cheese Biscuits with Tomato Jam.

I love savoury, and the cheese biscuits were actually my first choice, because apart from being deliciously moreish, they provided a slight trompe l’oeil  by looking a little like (sweet) Jammie Dodgers. I even found a special biscuit press/mould that had a little indent, perfect for holding a blob of the tomato jam. I’ve had a look around and can now only find it sold on one website, in Australia, so if you’d like one for yourself, you can find it here.

As the days ticked by, I wrestled with the recipe but just couldn’t get the biscuit texture to my liking. So at the 11th hour I made the decision to go with the Melting Moments.

Rummaging around in the cellar recently, I came across the biscuit mould and decided to look out the recipe to see if I could successfully tweak it to my satisfaction, and here is the result.

The two changes I made I picked up from reading old recipe books, which pleases me greatly because it demonstrates how something old can still have uses and application today. The first was to substitute cornflour for some of the plain flour, as first mentioned on here in the recipe for Cheese and Potato Pies. This added the crispness and crumbliness I had been missing in the original recipe. The second tweak was to use freshly grated nutmeg in the seasoning (ready-ground just doesn’t have the same flavour in this instance) that I discovered in Mrs Frazer’s (1791) recipe for Macaroni Cheese (included in my NEW book, Deja Food), and which adds a fantastically complimentary note to the cheese flavour.

Don’t feel obliged to make/use the Tomato Jam – tomato chutney is just as delicious and the biscuits can also be enjoyed without any adornment at all.