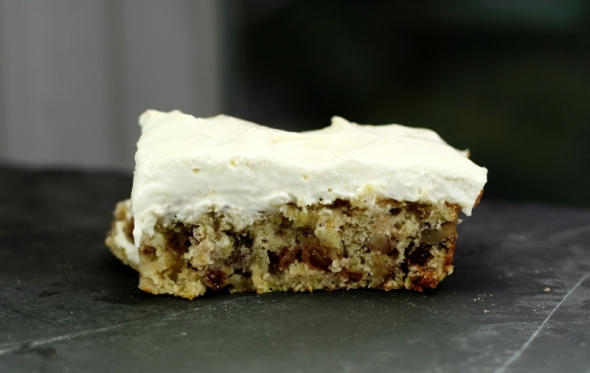 How was your summer? Did you have fun or did you blink and miss it?

Had a great break in France – SEE my brocante treasures….GASP at my bargain, 8-euro vintage linen bedsheets! – </gloats>

But now I’m back with a vengeance with an absolute corker of a recipe, just right if your home-grown tomatoes are remaining stubbornly green.

You trusted me with Russian Honey Cake and you remember how great THAT was. To be honest, I’m not sure whether Russian Honey Cake could beat this one in a fair fight – it’s seriously that good. I mean – this cake (technically) has FRUIT in it!

Last year I dragged this recipe out of my War and Peace sized BOOK of recipe clippings after Lorraine Stanton over at Vowley Farm got in touch, with a request for something to use up a glut of green tomatoes with something other than chutney. Along with a few other recipes (GT ketchup, GT mincemeat – both yum, by the way) I sent it off, with the caveat that (at the time) I hadn’t actually tried it myself, but would love to know how it worked out.

Suffice to say, based on Lorraine’s feedback I was hotfoot down to the farm shop for some green tomatoes! As per usual, I was unable to restrain myself from tweaking the recipe here and there, and kept sending MrB into work with the various versions in order to gather feedback from his colleagues. Long story short, by the time I was happy with the recipe, one of my husband’s colleagues actually ordered a Green Tomato Cake for his birthday! Huzzah! Alas, in the process, I had used up all but one tiny 300g bag of my green tomatoes – The Precious! – which has consequently been jealously hoarded in the freezer all winter.

And that put me in a dilemma – I really wanted to share this fab recipe, but it would have been too mean to do so when green tomatoes weren’t available. But now they’re here! Even if you don’t grow your own, you can ask around friends and neighbours or, like me, ask for them at a local farm shop – always ask, they might have a ton in the storeroom they think they can’t sell.

So – what’s it like? Well, if you’re a fan of carrot cake, but find that it can be a bit overly-sweet/heavy at times, then this is the recipe for you! Spicy, crunchy with walnuts, and sweet from the sultanas, the chopped green tomatoes keep it light and fresh-tasting. They don’t dissolve into a mush on cooking, but hold their shape and sharpness, whilst taking on the sweetness and aromas of the other ingredients. If you don’t tell people what’s in it, the look on their faces when they try some is priceless (in a good way!). They know that there is an awesome taste party going on in their mouths but they can’t quite put their finger on what it is.

I prefer to bake it as a tray-bake and slather on some lemony cream cheese icing – but again, this can all too easily slip into overly sweet, so in pondering the problem, I had a bit of a light-bulb moment and decided to try and combine the methodology for the light and silky-smooth Depression Era Buttercream to cream cheese icing. It took a few tries, but, to cut a long story short, it worked and its fab! Recipe below!

Convinced you yet? I hope so!

This makes a modest, topping-only (or filling-only) amount. If you’re planning on using it as a filling as well as a topping, double these quantities.

[1] If you don’t have a baking tray of roughly this size, I would strenuously recommend adding one to your collection – it is the one I use most: traybakes, shortbread, quiche, slab cakes, roasting joints of meat, roasting vegetables etc etc.