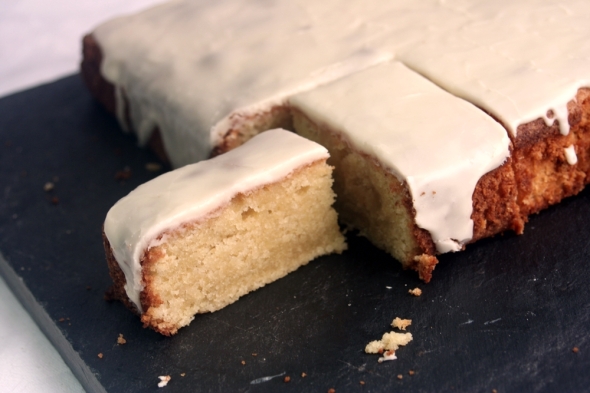 I’m already getting excited to go to France, and it’s more than a month before our holiday. We’ll be driving down to La Palmyre, which boasts a fabulous pocket of sunny weather on a par with the south of France, all summer long. We’ve tried various routes over the years, including one that ended up involving two hours of nose-to-tail traffic jams on the Nantes ring road *shudders*.

Nantes has redeemed itself somewhat in my eyes with the discovery of this beautiful, regional cake. It’s very simple, but it needs no bells and whistles to stand out amongst more gaudily decorated confections. It is the purity of ingredients and delicious flavours that make it such a winner. A single layer of cake, with a thin covering of ordinary water[1] icing, it is equally delicious as a dessert and as an accompaniment to morning coffee or afternoon tea. With everyone I’ve offered it to I’ve had the same reaction – initial lack of interest at its appearance followed by wide-eyed surprise and delight at the taste.

The cake’s ingredients hark back to the days when the merchant ships from the Caribbean would draw up alongside the quaysides of Nantes, bringing back their cargoes of sugar cane, vanilla and rum.

The the art historian, curator and Nantes native  Paul Eudel (1837-1911) claimed the cake was invented in 1820 by a master Fouacier, one Monsieur Rouleau at his premises on the rue Saint-Clément,  in the city.

Extremely popular for many years, towards the latter part of the 19th century the cake gradually suffered a decline until it was revivied in 1910 by the LU biscuit company, manufacturers of, amongst other delights, the petit-beurre biscuit.

Production of the cake ceased in the 1970s but it is seeing a revival in the artisan bakeries and boulangeries of the city.

Containing very little flour and no raising agents other than the eggs, this recipe could easily be adapted for the gluten-intolerant by substituting a gluten-free flour for the wheat. The large proportion of ground almonds makes the texture delicately crumbly, and keep it moist for several days. This is a make-ahead cake, best after having matured overnight in it’s haze of rum. 😉