← Things To Do With Choux
Gateau Nantais → 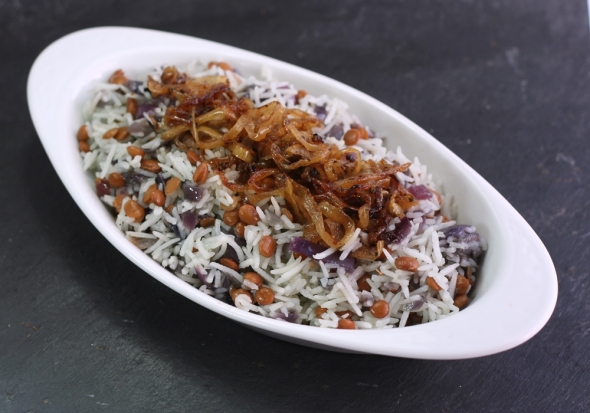 I’ve been meaning to post this recipe for about a year, and keep getting distracted with Ooooh, look! Shiny, SHINY new recipe.

But I have been stern with myself and, whilst there’s a huge slew of shiny new recipes to share with you, I’ve decided to include this recipe now because it makes a fabulous addition to the summer lunchbox or supper table – although it’s really an all-year dish and literally a meal in itself. I love to eat it on its own or with some salad. It’s a breeze to throw together and keeps well in the fridge for several days, to be reheated or eaten cold – its very forgiving.

It’s Mujaddara (moo-JADD-ara), exotic, middle-eastern cousin to the popular – have you not tried it yet? You’re missing out! – Noodles and Rice.

Now I love Noodles and Rice, and it makes a regular appearance on the table in this house, but truth be told, I actually like this version a little more: partly because of the awesome flavours, but mostly because it has no business tasting as good as it does with so few ingredients. It’s almost magical, the way three simple ingredients can be mixed together and produce such a tasty and flavourful dish.

I also love simple recipes, and if I was feeling flippant I’d make this one a candidate for the world’s shortest by leaving it as:

Whilst this is, in general, all you need to know, I thought I’d go through a couple of things in the process, specifically cooking rice so that it gives you dazzling white, tender grains devoid of gloop, and caramelizing onions correctly.

A few more comments about ingredients:

The quantities given are deliberately large, because it is so delicious and keeps so well in the fridge, you’ll be glad to have some for more than one meal. if you’re cooking for yourself, consider halving the recipe – it will still give you lots to enjoy.