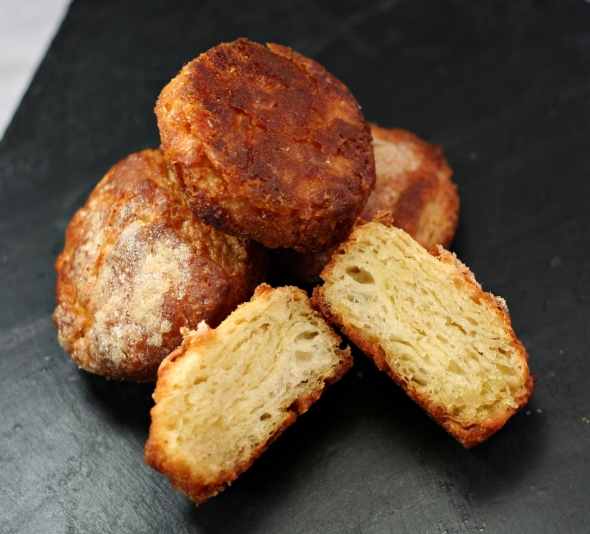 Oh my dears, have I got a treat for you this week!

The theme for Week 6 in this season’s Great British Bake Off is sweet dough, with a Showstopper Challenge of 36 sweet European buns.

The contestants will probably have to bake 3 x 12 buns, each with a different flavour, but rather than rush through three recipes, I’ve decided to concentrate on what would have been my number one choice, were I competing – the magnificent Breton specialty, the Kouign Amann.

To me, the name (pronounced ‘koo-een ah-man’) sounds very exotic, almost Arabic, but it’s actually from the native Breton language meaning ‘butter cake’ and couldn’t be more simple: a bread dough enriched with butter and sugar.

There are several recipes floating around on the internet, but my choice was only ever going to be that of Madeleine Kamman – the best French chef you’ve (probably) never heard of.

I’ve mentioned Madame Kamman before – hers is the recipe for Ratatouille that rehabilitated the dish back into my life after a good thirty years in the wilderness, and it can be found in her epic and invaluable The New Making of a Cook. Packed with clear explanations, occasional science and delightful anecdotes, if you’ve ever wondered ‘Why?’ in cooking, then this is the book for you.

Delighted as I am with my copy of The New Making of a Cook, it is Madame Kamman’s much later work, When French Women Cook, that I treasure most. In it, she chronicles her formative years in France both before, during and after World War II, and the impact on her life of eight remarkable women, the French regions they lived and in whose kitchens she worked and first discovered her love of cooking. Originally published in 1976, the book is one of the first gastronomic memoirs, and it has enchanted me from the moment I read it’s opening line: “Most of the recipes in this book have never been written down before.”

The recipes in the book evoke the very essence of each of the eight regions, but with the luxury of food availability in the 21st century, it is easy to reproduce them with the original ingredients specifid. Not that the recipes contain much that is either complex or exotic – many of them originate from times of hardship, when French women had to practice la Cuisine de Misère – the art of cooking with almost nothing. One of the first, and still one of my favourite recipes I made was the ‘Tarte aux Deux Choux’ – a tart of brussel sprouts and cauliflower – which sounds so simple – and it certainly was to make – but the flavours in the finished dish were incredible.

So how best to describe the taste of a Kouign Amann? It is similar to Danish Pastries and croissants, but sweet. The outside is deliciously crunchy and chewy, whilst the layers inside are soft and fluffy. For those of you familiar with regional British baking, it is a French designer equivalent of Lardy Cake. Now I love Lardy Cake (there’s a recipe in my book, she shamelessly plugged) – it’s delicious! But it is a whole world away from the buttery, crunchy, crisp confection of a fresh-baked Kouign Amann. The secret, of course, is in the butter, that pinnacle of Breton regional produce. If you look at a cheese map of France, you’ll notice that the region of Brittany is, surprisingly, quite bare of cheeses, because what the Bretons do best with their rich milk is make butter. It is possible to find butter from Brittany in the UK in some of the high-end supermarket chains, but you can also make this with regular butter, adding a scattering of fleur de sel or Maldon salt if liked.

More usually sold as a large cake, in keeping with the theme of this week’s Bake Off challenge, I’ve divided Madame Kamman’s recipe into individual portions to make ‘buns’. Thanks to a follower on twitter (@Edesiaskitchen ), I learned that these are called Kouignettes, and are now a ‘thing’ in Parisian bakeries. They come in a variety of flavours (see here) and appear to be formed differently, being rolled up in a spiral.  While certainly simpler and no doubt quicker to form, it also means that, in the heat of the oven, all the butter and sugar carefully layered into the dough will just melt and run out the bottom. Admittedly, this does mean a pooling of sticky syrup around the bottom of the pastry (not necessarily a bad thing), but keeping the layers horizontal as they bake, as in the method below, allows them to remain deliciously rich, and, as can be seen in the picture above, no excessive pooling of sticky syrup around the base. (Lordy! Anyone else fascinated/horrified by the torturous twists, turns and length of that sentence?? MAB)

Madeleine Kamman learned her Kouign Amann recipe from the accomplished Loetitia (pp267-308), a native Breton and ‘one of the finest Breton cooks’. You can’t get more authentic than that. Apart from adjusting the size for cooking, I’ve not changed this recipe. You will need 9 individual foil pudding basins like these.

Update: You can double the recipe, make the squares of butter/dough 20cm and cut the final folded dough into 16 squares. Only 1tbs butter per portion – it’s practically health food! 😉 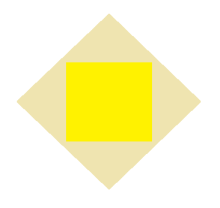 [1] A good quality Orange Flower Water is made by Nielsen-Massey. If yours seems a little on the weak side, feel free to increase the quantity accordingly.