Week 9 on The Great British Bake Off – where has the time gone?? – is Semi-Final week, and the Signature Bake is for three savoury canapes. Now, I could think of about a dozen canapes off the top of my head that have absolutely zero baking element, but that wouldn’t bear much relation to the Bake Off, so my guess is that it will involve pastry – especially since there was a, let’s face it, very similar sweet puff pastry challenge just the other week.

We’ve had shortcrust, filo, choux and puff – so the only one(s) left is/are flaky pastry and rough puff pastry, and I’m in two minds which way I’d go. The most impressive might be to make canapes using three different pastries. Then again, showing the diversity and range of what can be achieved using just the one kind of pastry might win brownie points too. If I were to go down the first route, I’d do some kind of mini quiche using my current favourite shortcrust pastry, alongside some gougeres and then something with either rough puff or flaky pastry on account of, as I believe I may have mentioned before, life being too short for puff pastry outside of competition, etc. However, I decided to go down the second route, and show a few of the possibilities using just one type of pastry.

Now I learned ‘The Big Four’ (basic pastries – puff, rough puff, flaky, shortcrust) when I was at school. Yes, I am so old I had proper cookery lessons – and still remember the recipes for all: shortcrust = half fat to flour, rough puff & flaky = 3/4 fat to flour, puff = equal fat and flour. Browsing the web I was surprised to see neither of the rough puff or flaky methods that I know ‘out there’, so I abandoned my Bake Off theme (kinda, but not really) and decided to make this post a basic How-To for both flaky pastry and rough puff. Yes, I KNOW that the title of this post just mentions rough puff, but it went so well with ‘stuff’. And no-one loves a rhyming title more than me! But to have included both would have gone very badly – I would have gone with something along the lines of Achy-Breaky Flaky, and from there it’s a short, rapid slide into lip-licking and twerking, and we don’t want that. Nobody wants to see that. If you’re not reading this in late 2013, you might wonder what I’m going on about. Be content with your puzzlement and move on. It’s for the best, believe me.

Here’s the lowdown on both rough puff and flaky pastry – quicker than a luxurious all-butter puff pastry, more special than regular shortcrust. As I mentioned above, the proportion of fat to flour is the same for both, but the methods differ. You might prefer one over the other, but as you can see from the photo above, the results do actually differ in a couple of aspects. The flaky pastry has a more even spacing of the layers, and has, for want of a better word, a more controlled rise. The rough puff above seems to have a bigger rise, and also bigger spaces between the layers. However, as will be seen in photos below, when cut into various shapes,they are very similar. One thing I did notice was that flaky pastry  lost it’s structure integrity when cut. That sounds a bit poncy, so I’ll put it another way. When I cut the sheet of flaky pastry into slices, it fell apart. The rough puff held together under the same conditions, and so would be the better choice as a base for an open ‘sandwich’ or for savoury mille feuilles etc. (see photos below).

The quantities below made for a range of items, but is probably a bit small to make a batch of one particular thing. Increase the quantities as you see fit.

As I have mentioned before, unless you’re catering for vegetarians, the best pastry is made with a mixture of half butter and half lard – butter for flavour, lard for crispness.

Make sure the butter and lard are very cold to start.

Make sure the fats are at room temperature.

This post is already way too long to go into much detail, but the pictures below show how each of the pastries performs with a variety of canape shapes. Each was glazed with beaten egg (except the rough puff spoons, I forgot, mea culpa), then baked for a total of 10 minutes in a 200°C Fan oven, turning the baking sheet around halfway through the cooking time. I’ve left them mostly unfilled, to display to better effect, how well each type of pastry performs with each of the various shapes.

Key to the Canapes (same for both pictures)

In each photo the FLaky pastry is on the Left 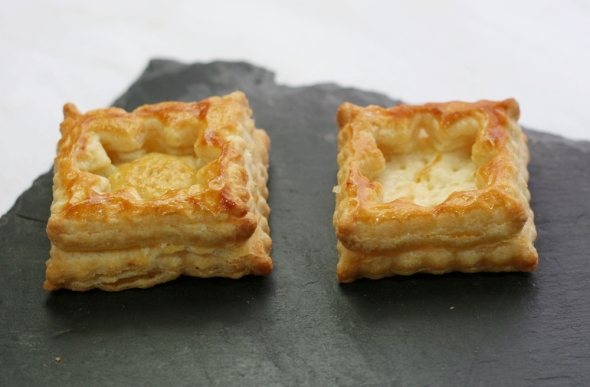 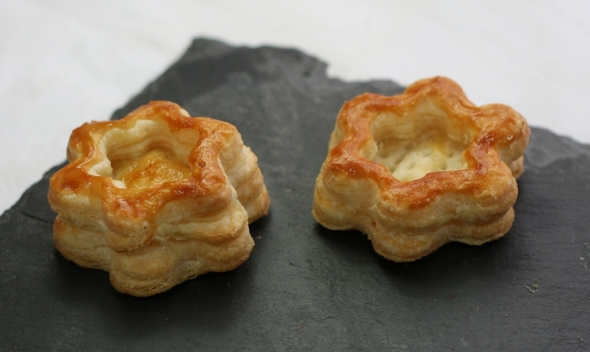 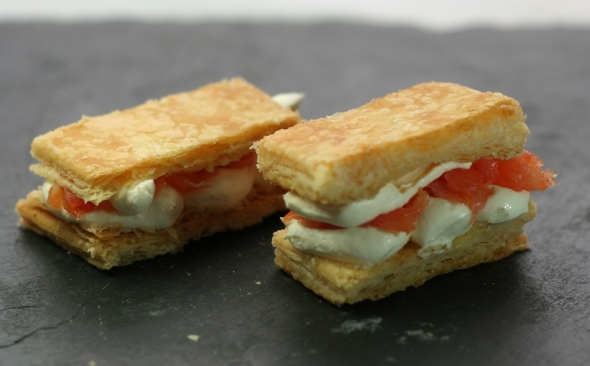