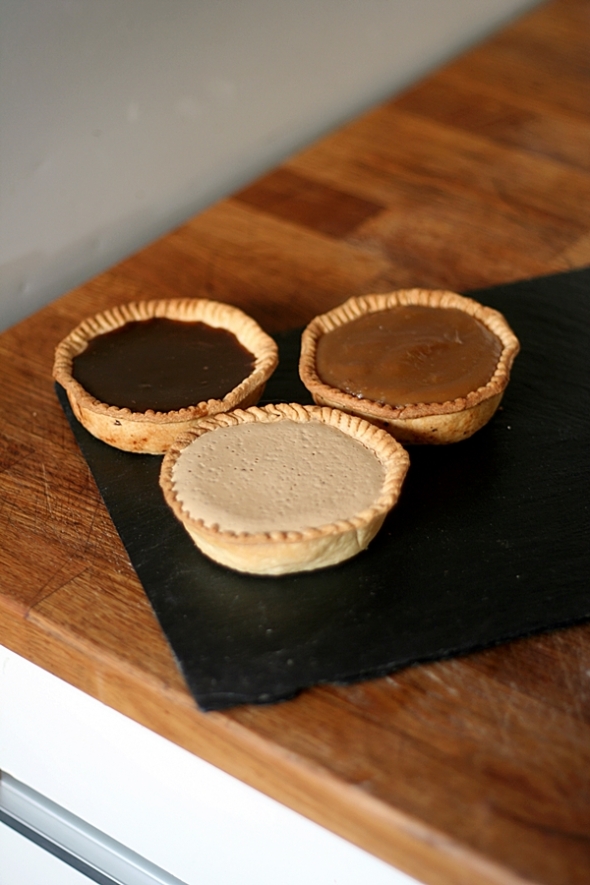 Despite the above picture, this post is really all about pastry. Sweet, shortcrust pastry.

Some time ago *waves hand vaguely* I introduced you to an all-butter pastry which I had adapted from an old Victorian commercial baker’s book. The crust for my Cheese and Potato Pies has about 25% cornflour, which makes it fantastically silky-smooth to handle and which also bakes beautifully crisp and dry.

The recipe this week is for a sweet version, also from the same baking handbook: slightly different flour/butter proportions and enriched with the yolk of an egg, it is both more crisp and more delicate than the savoury version and a perfect foil for the three sweet fillings I’ve lined up for you, because I thought it rather a cheek to give you just a pastry recipe this week and let you get on with it. Plus I couldn’t get a lump of pastry to look tempting all by itself, so here we are.

The fillings are very much variations on a theme of dark muscovado sugar and I’m really pleased with the three differing flavours that resulted. The Butterscotch is really dark and very much a ‘grown-up’ flavour – you could even add a slosh of real scotch to ramp it up to dinner-party level. The Toffee is very child-friendly in flavour – almost mild – and a real comfort food. The Gypsy Tart is a 2-ingredient classic that harks back to memories of school dinners. There are many recipes for the filling ‘out there’, most of which generally have too high a proportion of sugar and too much milk, resulting in gigantic pies of tooth-aching sweetness. This version makes for a light and frothy filling with just the right balance of flavour and sweetness. It is the only one of the three that needs any further cooking once poured into the pre-baked pastry shell, but at just 20 minutes in a cool oven, these too are ready in a flash.

I’ve left all three unadorned, but you could add embellishment if you like – unsweetened whipped cream or creme fraiche rather than more sweetness in a chantilly or buttercream, is my recommendation. A smattering of chocolate sprinkles for the toffee tart, perhaps? Your call. 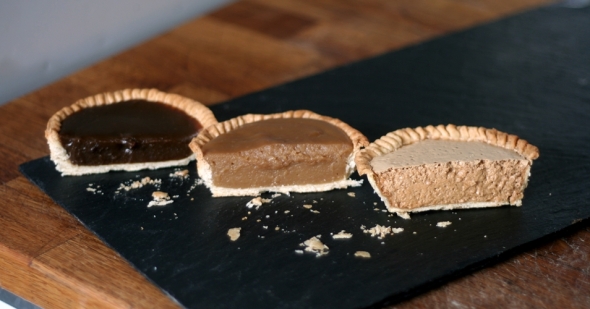 This quantity makes enough for one large tart or 4-8 individual tarts.

Warm the golden syrup before measuring it out, it will be much easier to pour accurately.