A French-themed post this week, but not a mountain of patisserie froth – instead I’ve gorn all savoury!

Prowling round the French brocantes (posh car boot sales), I’ve always got an eye out for second-hand cookery books and this year I found a great little paperback entitled Vosges Grannies Recipes (I paraphrase) – regional recipes from the mountains in eastern France, near the German border.

The booklet has lots of simple and comforting dishes, including this one, which I decided to include not only as a delicious, make-ahead meal, but also as a blueprint recipe for having up your sleeve or – more usefully – in your freezer.

I especially like this recipe because it isn’t rich. Too often a gratin dish is swimming in oil from fistfuls of cheese or cream. This is altogether much lighter and can easily be adapted to a variety of fillings, including vegetarian. It also doesn’t require a trolleyload of expensive ingredients, yet it’s packed with flavour, and is very simple to bring together.

The Anatomy of a Gratin

Using this recipe as an example, there is a bottom layer of lightly steamed leeks, followed by a tangy tomato and bacon layer, topped with a white sauce sprinkled with cheese. The tomato layer is bright from the fresh tomatoes, bold with the favour of herbs and tangy with bacon. All of the component ingredients can be prepared beforehand, then either hauled out of the fridge and assembled and baked, or assembled and frozen until required.

Imagine the joy of getting home of an evening knowing you’re just 30 minutes away from a delicious home-made meal that requires – literally – one minute’s preparation: stick your defrosted gratin in the oven, turn it on, go have a shower or read the paper, open a bag of salad, cut a slice of crusty bread and Bam! Supper is served!

It doesn’t have to be leeks – other options for the base vegetable are diced swede, turnip, carrots, parsnips) or a mixture of all of these), potatoes, celeriac, cabbage (Savoy, white, red, mixture), broccoli, cauliflower, sprouts – you get the idea.

If you’re vegetarian, you can substitute blanched samphire (its deliciously salty) for the bacon in the tomato sauce – add it whilst assembling your dish to keep some of its crunch.

Top with white sauce or for a gluten-free option, use low-fat creme fraiche.

Sprinkle with a cheese of your choice. Choose Comté or Gruyere for melty goodness, Grana Padano or Parmesan for punchy flavour. Whichever you choose, you don’t need a lot. People think a gratin is all about the cheese, and it’s not. The gratin in the photo had just 30g of Comté on the top, which was more than enough. The cheese is a garnish, if that. A gratin is about a crunchy topping. You can substitute breadcrumbs for the cheese, or a mixture of half breadcrumbs, half grana padano.

If you don’t have a stack of gratin dishes – who does? That’s my one-and-only in the photo – the supermarkets sell packs of aluminium foil dishes with cardboard tops, perfect for freezing. No washing up, either! These can also be used to heat the defrosted dish up in the oven. You wouldn’t be able to defrost them in the microwave, but being in a solid block they would be easy to decant into something suitable.

This recipe will make 4 portions of gratin. You can easily double or treble the quantities and make a stash of meals for the freezer. 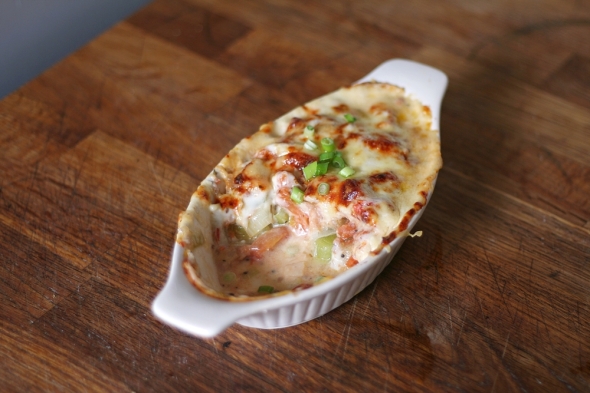 120g grated cheese, or breadcrumbs, or a mixture of both

3 Comments on “Leek and Bacon Gratin”