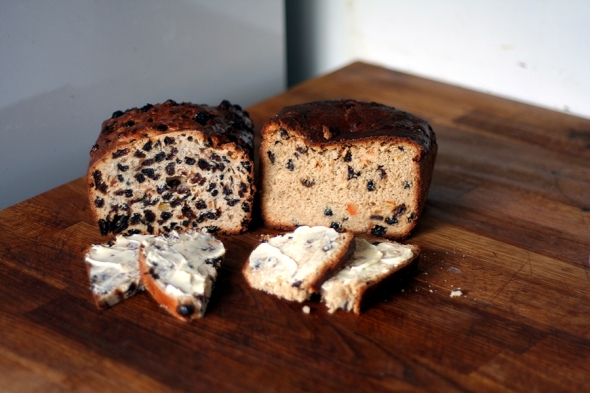 The obsession with yeast continues!

This time, it’s the classic Welsh speckled bread Bara Brith. Nowadays, this is usually made using baking powder as the leavener, but personally I prefer the more traditional yeast.

And bonus! There’s two recipes for you to choose from!

When looking at an old recipe, I usually study the range of recipes available and select the one that, to my imagination, sounds the nicest. If there is a tie, then I will make both and decide which makes the cut by taste. This time, however, it was too difficult to decide, so I chose not to choose and leave that decision to you.

Both recipes have their strongpoints, not least from their provenance and pedigree.

On the left of the photo above, we have the recipe from Walter Banfield’s classic book “Manna”: A Comprehensive Treatise on Bread Manufacture (1937), a book admired by Elizabeth David and breathtaking in its breadth and scope. It is based on additions made to ordinary white bread dough after its first proving. The large quantity of fruit and peel contrast brightly against the white of the dough and make for a very sturdy slice that will keep moist for a long time.

On the right of the photo, a possibly more authentic Bara Breith from Mrs E.B.Jones, who, for many years, ran the Powys Temperance Hotel on Market Square, Llanrhaeadr-Ym-Mochnant in the first half of the 20th century. The recipe was collected by Dorothy Hartley and included in her iconic book Food in England, first published in 1954. As can be seen from the picture, this recipe isn’t as heavily fruited as the first one, but it has the added interest of being made from half wheat flour and half oat flour (finely ground oatmeal). Against expectation, the crumb is very light, making it a much more delicate slice.

I love the richness of the fruit in the bread dough version, but also really enjoy the delicate flavours of Mrs Jones’ version. I suggest you make both and decide for yourself.

Both loaves will keep well wrapped in parchment and foil, in a cake tin. Both are best enjoyed sliced and buttered, with a hot cup of something in front of a roaring fire.

Don’t feel the need to order oat flour especially for this recipe, you can make your own by blitzing rolled oats in a spice grinder, or just use medium oatmeal for a more robust texture.