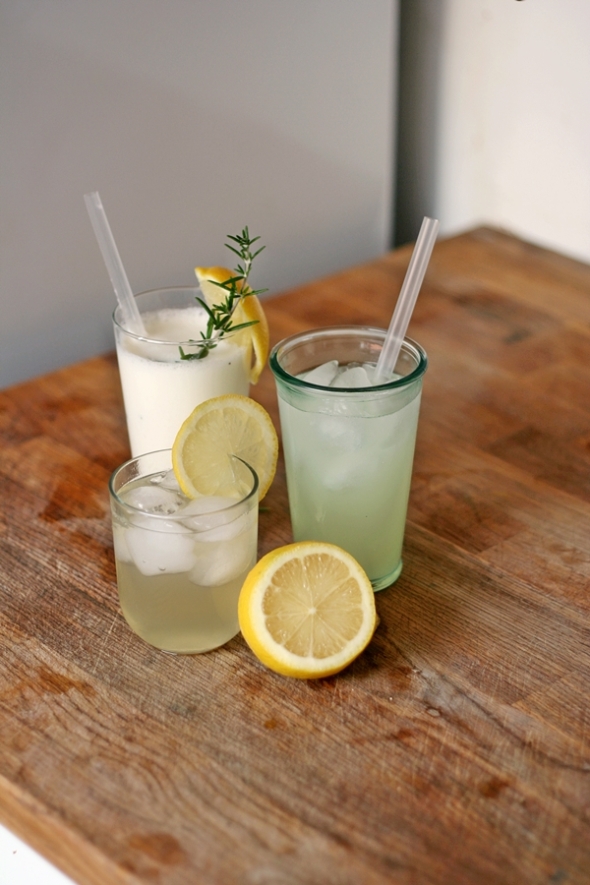 A bumper-fun pack of recipes for you as I bid a brief farewell for the summer – there’s too many weeds in the garden and the fruit bushes are burgeoning! I’d hate you to get bored while I’m away, so I’ve prepared a few things for you to play with in the interim.

I don’t think I’ve done drinks on the blog before, but I’ve got a trio of delicious variations on lemonade, originating in the 17th century manuscript books at the Wellcome Library. They are each wonderfully thirst-quenching and will make for a delicious treat to have in the fridge.

There’s also a sweet treat in the form of shortcake: made with the odd-looking but fantastically-flavoured flat peaches and nectarines, available just now in the supermarkets and in abundance in France where we spend summer holidays – can hardly wait! It is served with Standby Cream, made from evaporated milk and lemon juice. Obviously, cream would be first choice, but if you’re out or the cream you have has unexpectedly turned, then it’s handy to have up your sleeve – and in your cupboard. I found the recipe in an old Whitworth’s leaflet from the 1940s.

Sidebar: I cannot stress highly enough the wonderful recipes that are to be found in various vintage cooking and baking leaflets. Not all will be gems, I grant you – a prime example being Fanny Cradock’s Banana Candles – but it is worth browsing through them, however dull they appear from the cover, with the aim of spotting something delightful.

And finally, for the adventurous, an unusual dessert in the form of a gloriously vibrant beetroot tart: given an official Thumb’s Up™ by my daughter.

Mrs Yorke’s Lemonade – the best that can be made

This is a very refreshing drink similar to an Indian lassi. The milk will tend to separate slightly, so blending the drink just before serving helps combat this.

Slices of lemon and sprigs of rosemary to serve

Flat peaches and nectarines are, almost without fail, sweet and juicy, and their flattened shape makes them much easier to eat in public and still retain some dignity. Their shape also make for perfectly sized slices for these shortcakes. These quantities will make 2 shortcakes, each of which will serve 4-6 people. If this is too large for your needs, use just half the fruit and freeze the unfilled second shortcake until wanted. The cream will not hold it’s shape indefinitely, so it is very much a whisk and serve at once ingredient.

I’ve tweaked this recipe slightly and baked it in a pastry case, for ease of serving. The original method was for a buttered-and-breadcrumbed bowl. The cooking times are roughly the same. The flavour is very light and delicate, the lemon counteracting a lot of the beetroot’s sweetness.