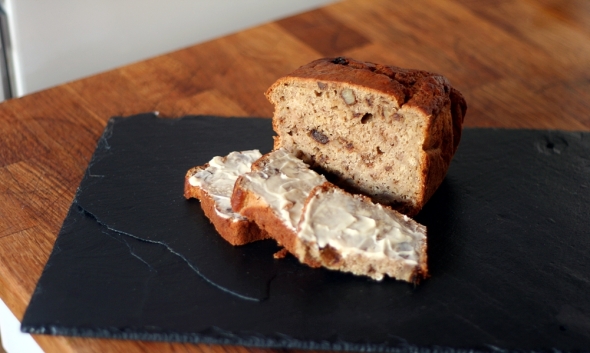 I’m back from holidays  and summer is over. Two completely unrelated events, I hasten to add – I am NOT responsible for the damp, muggy, drizzly weather mumbling around lately.

But the weather might have something to do with my choice of recipe this week.

As always, I return from France inspired and enthused by the food and produce and having snapped up a few books on patisserie and regional food, I was all prepared for a mammoth, cream-filled bake-a-thon. I even brought back some glorious Normandy butter to use in artery-hardening quantities.

But instead of all the frills and froth of French patisserie, it turned out that what I actually wanted was a teatime treat in the form of this fruity loaf, faithfully retrieved from a yellowing farmhouse baking book of Yore™. Mostly.

Because when I decamped to the kitchen I found that I was the proud possessor of just a single egg and the recipe called for two. I didn’t feel incined to make a trip out just for eggs, so I turned to the web to refresh my memory on apples and egg substitutes.Sure enough, about 60ml of apple puree works a treat, and one eating apple makes almost exactly 60ml of puree.

This recipe has dates and walnuts, which make for a delicious tea loaf, but can also make it a little dry, almost dusty, especially if the walnuts arent in their first flush of youth. Deliciously, the inclusion of mashed bananas helps with the moistness and the apple sauce really brightens the flavour with its freshness. Neither flavour dominates, making the loaf wonderfully flavoursome. Finally, it is brought to a rich, batter consistency by a splash-ette of lager – and indeed, Lager Loaf was the original recipe title – but that sounds too much like Lager Lout to my ears – which is far from tasty – so I feel justified in renaming it.

And it is a distinct improvement to eat spread with butter, with a cup of something hot.

You don’t HAVE to make this with the apple – if you have the eggs, just use two and no apple.