Behold the best baguettes I have ever made! Aren’t they pretty!?

Having enjoyed the luxury of freshly-baked bread whilst on holiday, I decided to see if I could capture all that crunchy goodness myself. I’ve had a few attempts over the years, but nothing has been particularly successful, the main fault usually being the consistency of the dough: it’s either to tight and bakes heavy, or it’s too lithe and bakes flat.

So I turned to the internet and found a genuine Frenchman who not only explained the legal requirements of the composition, i.e. since 1993 the “baguette de tradition française” must be made from wheat flour, water, yeast or levain or both, and common salt. It may contain up to 2% broad bean flour, up to 0.5% soya flour, and up to 0.3% wheat malt flour, but he also had a video demonstrating his method, which is what produced the fab loaves at the top of this post.

Caveat: The method is simple and straightforward if you have a mixer with a dough hook and an oven that will get really hot. If you don’t have both, then this is not the post for you.

Don’t be tempted to tweak the recipe – I have been there and done that already, so I’ve saved you time. Don’t get lazy with the measuring of the ingredients, or try and rush the rising time. Just follow the instructions as they are written and all will be well.

You will also need a large container to store your dough in the fridge for the required time, with enough room for it to expand – I have a 5 litre plastic box with a lid that just squeezes onto a shelf.

If you’d like to watch the video, you can find it here.

Aside from translating from French, I have not changed this recipe at all. 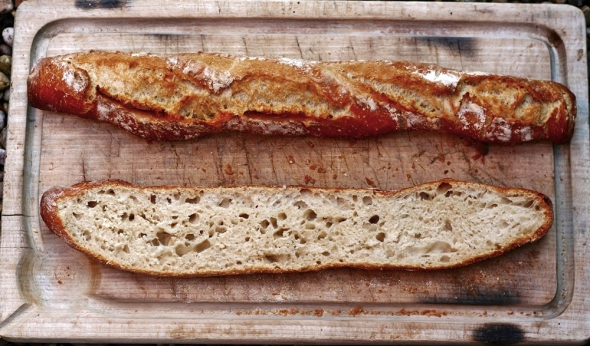 The method for this dough does not require much effort, only time. Be sure to allow each stage its full allotment of resting time. One batch of this dough is just enough for five standard baguettes, although I have been making just four, and adding the remaining dough to the next batch of baguette dough, as a levain.

I recommend watching the video above to see how to handle the dough – it’s a controlled ‘tip’ and gentle initial shaping of the dough.