I’ve been serving these up for weeknight suppers for years – I serve up other stuff too, not just these – and my daughter recently asked me if they were on the blog. When I replied that they weren’t, she asked “Why not?”, to which I had no answer, so here we are.

Over the years I’ve tried a number of tweaks and improvements, but this version, possibly the simplest, has always come out on top. Nevertheless, whether you’d like to try these variations for yourself or save yourself the bother, I’ll quickly run through the possibilities for switching up the details. 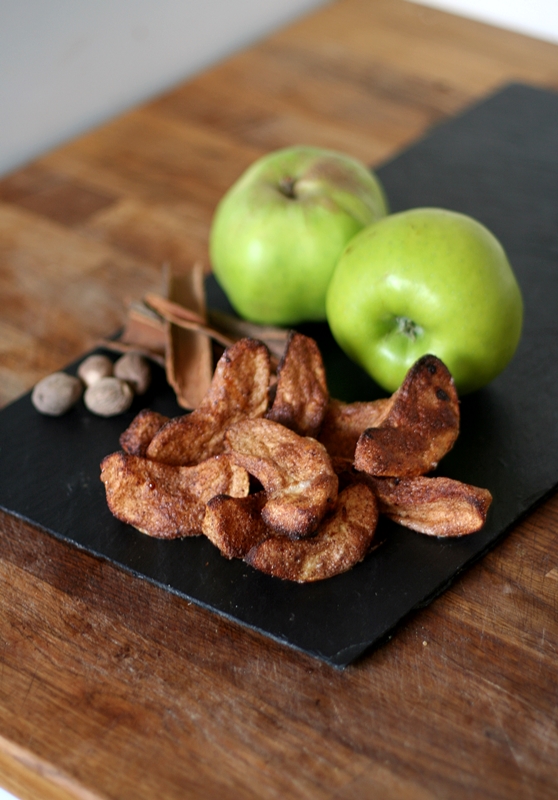 Here’s something I created following on from the post about Fat-Free Crispy Oven Chips a few weeks ago.

I wanted to see if it would work with something sweet and after a bit of trial and error, found the perfect pairing: Bramley Apples.

Bramley Apples are native to the UK and are the most popular choice for a cooking apple, because when cooked, they fluff up into a froth of apple puree without releasing too much juice – ideal for baking pies and for this recipe! The coating of spices and egg-white emerges from the oven deliciously crisp, yet as you bite into them, the apple inside collapses in a puff of froth.

If you can’t find Bramley Apples, I am assured by @essjayeff of Essjay Eats that Granny Smith apples also fluff up during cooking.

Delicious as a dessert or a snack, they’re fat-free, wheat-free, gluten-free, sugar-free and paleo friendly – and ready in just 20 minutes!

I like them plain, but then I’m especially fond of sharp-flavoured apples. You could always add a sprinkle of sugar or some cream for dipping if you wanted to be indulgent, but the dazzle on your halo after eating such a healthy dish is almost as delicious as the fries themselves! 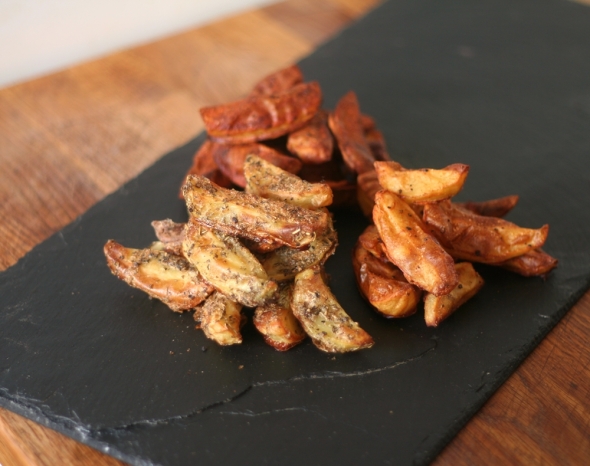 Here’s a life-altering post *she claims, modestly* in that it is for crispy, oven-baked chips. Chips, not fries (which are too thin to enjoy, in my opinion), although the term ‘wedges’ would also be permissible.

The main difference between these and other oven-baked chips is that they’re fat-free.

Not, as many another oven-baked recipe turns out, oven-baked in oil – but completely fat free.

The secret is egg-white. Add your favourite spices and flavourings to some egg-whites and whisk until frothy – although frothiness isn’t compulsory, a light whisking that just loosens the egg-white is perfectly sufficient. Toss parboiled potatoes in the mixture, lay on parchment and bake in the oven and Tadaah!

It’s that simple. No need to sigh at the prospect of having to make yet more meringues/macaroons when faced with leftover egg-whites, THIS is the new way to use them up.

Infinitely customisable, I’ve made several batches, trying different flavourings, and each one has turned out dry and crisp and fluffy inside and deliciously fat-free.

Enough chat, on with the recipe!

The following quantities are sufficient for 2 generous adult helpings. Scale up for larger quantities.