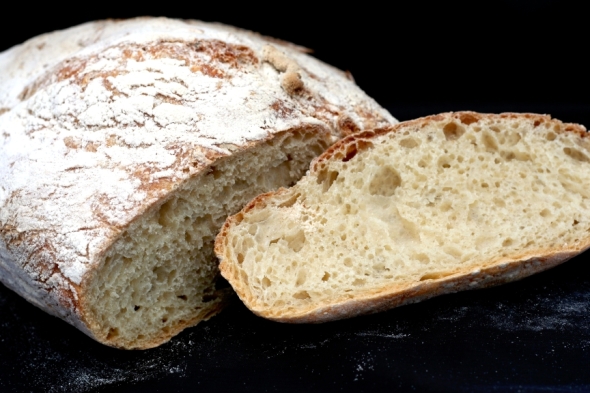 Here’s another great loaf for anyone apprehensive about kneading dough to a good consistency. As with The Grant Loaf, there is no kneading involved at all – but whereas the Grant Loaf is ready in under two hours, this loaf requires the best part of a whole day before its ready. The waiting time is the price you must pay – but it is so worth it. The recipe has been knocking around the internet for about 5 years, but it might still be new to some in the UK.

Jim Lahey devised this minimalist method of bread-making back in 2006 at the bakery he owns at 533 West 47th Street in Manhattan. With no special techniques, equipment or ingredients, Jim’s method achieves the crisp, crackling crust that bigger bakeries normally have to rely on giant steam ovens to achieve. So passionate is he for everyone to succeed with their bread-making, he published his recipe and released an online video.

The slightly unusual method used to bake the bread requires something both lidded and oven-proof. A cast-iron casserole is ideal, but since The Great Shelf Collapse of 2008 when all my cast iron cookware got smashed (yes, all of it *sobs*) –   I’ve had to improvise, and can report that either Pyrex or ceramic is just as effective.

I’ve doubled Jim’s original recipe because I know from experience, once out of the oven, it goes really quickly and then you’ll be disappointed if you have to wait another day in order to eat more.

No Knead Bread – The Grant Loaf 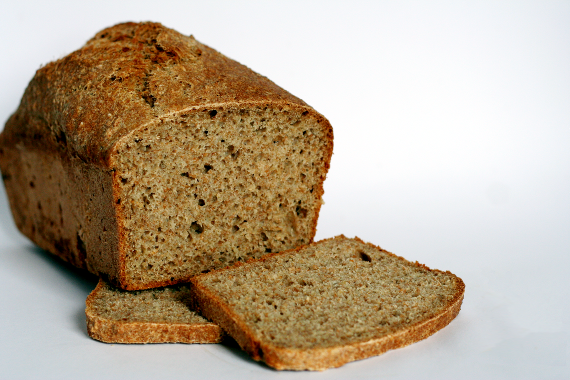 If you’re going to bake your own bread, you could do worse than start with this one – it doesn’t require kneading, it only needs a very short, single rise, and you can have a batch of three loaves cooling on a rack in an hour and a half! The recipe has been around for almost 70 years – read on to find out more about it and its creator!

Tireless campaigner for healthy eating and the promotion of unadulterated foods, Doris Grant was a champion of fresh, natural ingredients and the minimal processing of food, and she maintained a running battle with major food companies in the UK for more than 60 years.

Almost crippled with arthritis in her youth, Doris found relief from her symptoms by following the food-combining diet of Dr. William Hay. With her health restored, Dr. Hay encouraged Doris to write her own book for the UK market, and thus began her publishing career. Alongside her many best-selling books, she is immortalised as the creator of The Grant Loaf.

Originally, The Grant Loaf was a mistake. While teaching herself to bake in the 1930s, it was several months before Doris realised she had not been kneading her bread dough.  It didn’t seem to have made much of a difference to the loaves, and was a great deal easier and quicker than the traditional method, so she included her ‘mistake’ in her 1944 book Your Daily Bread. Here, with only a few adjustments, is that original recipe.

The dough ends up a lot wetter than traditional dough – so wet in fact, that kneading would be impossible if it weren’t already unnecessary. The bread itself is firm without being brick-like, and has a wonderfully nutty flavour as well as making great toast. I bake it in our house as our everyday bread, including sandwiches and packed lunches.

This recipe makes three loaves for two reasons:
1. It uses a whole bag of flour at once – no messy half-bags to clutter up your cupboards and spill over everything.
2. It makes sense, as well as efficient use of the oven, to cook more than one loaf at a time and the additional loaves can easily be frozen for use later.

Variations: This method can also be used with brown bread flour, for a slightly lighter loaf.