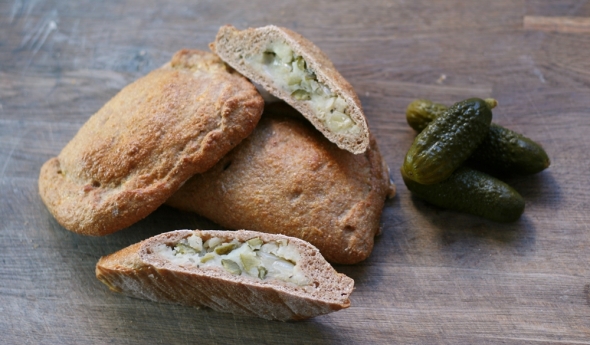 I’m a big fan of minimalist recipes – three or four ingredients that work perfectly together and need no embellishment. So hot on the heels of the recent three-ingredient recipes, I have another recipe which will surprise and delight in equal measure.

As some of you may recall, my search for the delicious knows no bounds, and I frequently find myself on blogs and message boards in far flung places. Recently, it was Russia, where I found multiple variations on a theme of Tasty Stuff Wrapped In Bread Dough™. Amongst them was a version of the recipe I have for you today, with a filling of onion, potato and pickled gherkins.

The potato provides body, the onion savouriness and the pickles both crunch and zing. Using yeast dough instead of pastry keeps it low in fat, although you absolutely can use rich, buttery, puff pastry to add a level of luxury.

I’ve opted for wholemeal flour, but white is also fine, as are any other favourite yeast doughs.

Perfect for packed lunches and picnics, substantial without being heavy, they are also both vegetarian and vegan (depending on your bread recipe). They are also a proportional recipe – another of my favourites – so you can make as much or as little as you like. Perfect for small test batches.

I do hope you’ll give them a try – you might be pleasantly surprised.

In my quest to find tasty recipes for you, I often find myself poking round some odd corners of the internet. Recently, this has taken me to some delightful Russian blogs, where I found this week’s deliciousness.

It is for a flavour-filled picnic loaf, or snack loaf, seen on the left above and is one of the speediest mixings I’ve ever found – you can mix and bake this in about an hour. Additionally, many of it’s components are regular storecupboard or fridge dwellers, making it a snip to bake at short notice. I’ve called it a Picnic Loaf because I suspect the Russian title (Snack Cupcake) lost something in the Google-Translation. I’ve also made it a little healthier by substituting the original sour cream for low fat creme fraiche.

The texture is unusual in that it is incredibly light and tender, even with all the added flavourings, and when toasted, the crunchy outsides contrast deliciously with the soft interior of the slice. It is packed with regular protein – diced cheese and sausage – and texture and even more protein is achieved with the addition of cooked kidney beans, which are a real delight to bite into as well as eye-catching with their red skins and pale interiors.

Initially I was just going to post the one recipe, but then realised it would exclude all the non-meat eaters. Then I thought I could crack a joke by saying “Look, it’ a loaf for everyone: there’s sausage for the meat eaters, cheese for the vegetarians and beans for the vegans” but realised that would be in poor (yet still delicious) taste. So I decided to create a second, vegetarian version. Alas, with the dairy and eggs, making it vegan is a stretch too far, but that said, I’m really pleased with what I came up with, because I think it’s actually more delicious than the original.

Inspired by the addition of the kidney beans, and having a tin to hand, I set about creating something chick-pea based. After much metaphorical pencil-chewing, I was really struggling to come up with replacements for the cheese and the sausage, so I gave up that idea entirely and decided to make hummus bread: not to dip into, but a bread that tastes like hummus. With a little parsley for colour and a couple of trials tweaking proportions, it came out better than I had imagined. And toasted – it’s fantastic. 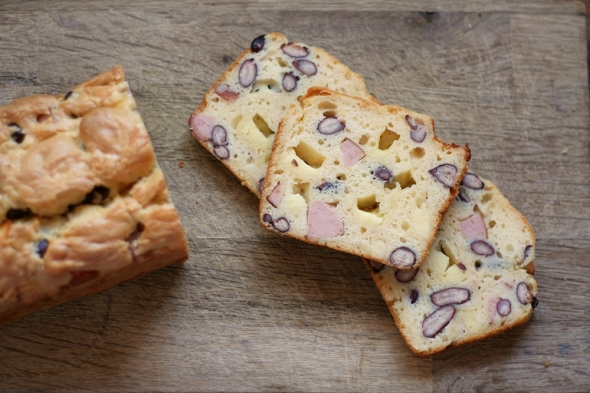 You don’t need to be heading out on a picnic to make this, my daughter has been enjoying a couple of slices toasted as an after-school snack. 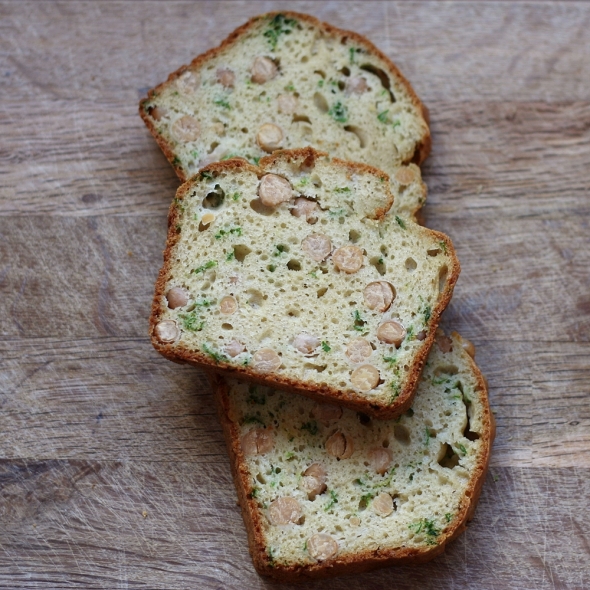 The method is practically the same as the loaf above, but I’ll write it out here as well, to save you from scrolling up and down. 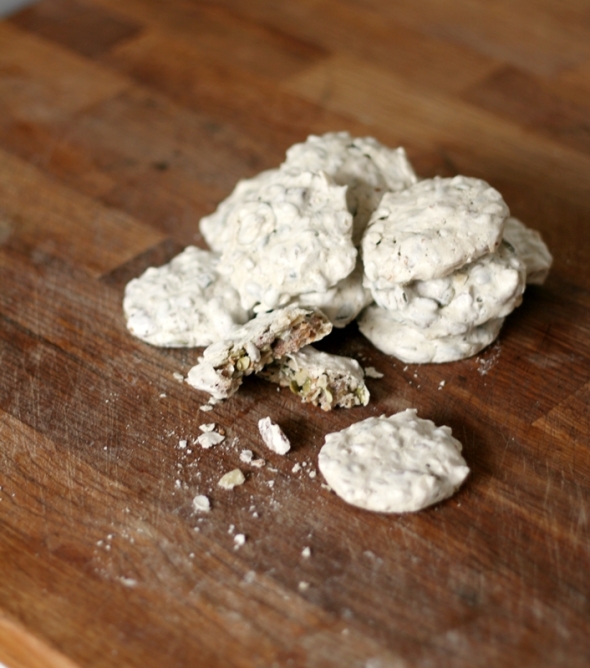 I’m on a bit of a using-up-egg-whites roll at the moment, having made a lot of egg-yolk-heavy recipes recently, and so here is a variation on meringue that is ideal for lunchboxes, mid-morning snack or afternoon energy boost.

They’re gluten-free and, although they contain sugar, the amount-per-biscuit is really quite low (about 5g), so they can also sneak in as a Paleo treat.

They’re packed with nuts and seeds for all those beneficial vitamins and minerals. You can also choose to make them even more substantial by replacing the flaked almonds with some toasted oats (steel-rolled for preference – less dust, more crunch!) if you like. Don’t feel obliged to stick rigidly to the ingredients below, just make up the overall weight with your own mix of nutty goodness: sesame seeds, poppy seeds, walnuts, hazelnuts, pistachios, etc.

Short and sweet (and crunchy!) this week. 😀