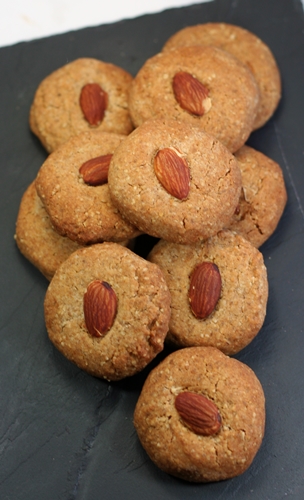 As you may know, I have one or two cookbooks lying around *ahem* and I haven’t actually got around to making absolutely all of the recipes contained therein.

But I’m working my way through slowly – and it’s just fabulous when I discover little gems like the recipe this week, tucked away as it was in a nondescript little booklet from the 1940s.

For a start, I have all the ingredients in the cupboard – I just LOVE it when that happens. A huge pet peeve is finding something delicious in a recipe book or online – only to discover a trip to the shops is required. So these are a great ‘spur of the moment’ bake.

Second, the recipe doesn’t make a whole mountain of biscuits – I got just twelve out of this batch. And they’re so fast to put together – little bit of melting/warming of liquids, chuck in the dry ingredients and you’re done. Even taking the time to pretty their appearance up doesn’t take long, and with 12 minute cooking time, you can be dunking them in a cuppa in not much more than 20 minutes.

Also – oats. YUM! Just LOVE oats in a biscuit – they make them it so crunchy and satisfying. Great energy snacks too. I can just imagine these biscuits being stuffed into pockets to snack on during invigorating afternoons tramping about the countryside.

And then we come to the main reason this recipe caught my eye. The lard. Yes – I did a double take too. But it works beautifully – and deliciously. And for me it also absolutely makes it a biscuit of country origin. Back in the day, not everyone could keep a cow – but most cottagers would have a pig, and once butchered for the winter, a ready and plentiful supply of lard. If you really can’t face it, you could try butter, but I haven’t tried it myself, so do let me know how it goes if you do.

What are you waiting for – get spur of the moment baking! 😀